The New England Visionary Artists Museum is called such because we find it paramount to not only celebrate art, but the artists who create it. An artist we cherish for her work, her life, and her contribution to the NEVAM is Genevieve Burnett. Born in Amherst, MA in 1945, she passed away in 2015. Genevieve’s life was as rich and stunning as her artworks.

Though born into favorable resources, Genevieve was diagnosed early on with schizophrenia. American culture in the 1950s certainly did not take pains to normalize mental illness, and so Genevieve was often relegated to schools for “exceptional children,” while she struggled to be accepted by her peers. Much of her family’s wealth was inherited from her grandfather, William A. Burnett, through his successful straw hat business. After his death, he donated much of his impressive art collection to the now-titled Burnett Gallery at the Jones Library in Amherst, MA. It was in this gallery that Genevieve had her first art exhibit. Having already spent much of her early life ostracized and misunderstood, this first exhibit was a thrilling accomplishment for her.

The daughter of Kathleen Johnson Burnett and William Burnett, Genevieve grew up with two brothers, Thaddeus and Robert, never having met a half brother from her father’s previous marriage. “Tad,” being much older than Genevieve, spent a large part of her childhood in military service. However, Robert and her shared a richly fantastical play-life within the walls and fence-posts of their stately home. The neighborhood they ran through was not far from the home of the then-living poet, Robert Frost.

Genevieve had a tumultuous and passionate young-womanhood. Much of her time was spent in and out of psychiatric hospitals, battling both her intensifying schizophrenia and dependence on recreational substances. Present too were numerous devoted, complicated, and equally unstable boyfriends, from whom Genevieve found much inspiration. Despite, and perhaps thanks to, her complicated world, Genevieve devoted every moment possible to depicting her world in image. Many of her subjects included portraits of family members, boyfriends, and images of various mental hospitals. Much of her diaries included detailed, emotional, and riveting descriptions of her day-to-day existence.

As she reached maturity, she consistently sought gallery shows and recognition for her work. Genevieve sold some paintings, and her work was respected by the surrounding artistic community which knew of her. Once, she was offered a show in Colorado. Despite numerous protestations of family members and friends, she drove hundreds of miles alone, thrilled to see her work in such far reaches. Unfortunately, exhausted from her travels, she fell asleep in her motel and missed the opening.

During this point in her life, Genevieve found her best companion, Mike the Cat. Around this time too, Genevieve became involved with us at the AHOA/NEVAM. Because of her deep love for Mike the Cat, her hundreds of portraits of him exist today. She also hand-painted dozens of secondhand T-shirts, many of which are owned and still treasured by the local community today. Mike the Cat passed away, and was buried in the Burnett family plot by Genevieve and friends. Her involvement at the AHOA/NEVAM spanned decades. While here, she painted frequently in our studio space, had many group and solo shows, and was aided in applying to be shown in other venues. Genevieve developed many friendships here, and also participated in group projects, such as painting murals in what was formerly a psychiatric hospital in Northampton, MA.

In 2008, Genevieve’s independence was arrested by an accident at home, leaving her non-ambulatory, and in result was sent to live in a nursing facility. At this point, there became a need to find shelter for her hundreds of handwritten journals, photographs, drawings, and over 700 oil paintings. Genevieve asked the AHOA/NEVAM to protect her documents. Genevieve's artworks, long record of her life, collection of news clippings and photographs, and most importantly, her testimony of her life, have produced a most distinct history.

Genevieve’s love of painting could not be thwarted, and she continued spending her waking hours with pencils, paints, and pens. Having never received a college degree, Genevieve was often insecure about her level of education. Never one to feel rendered helpless by her self-doubt, she worked for years on artistic treatises and histories, with pages numbering in the hundreds. With her diaries spanning into just a few days before her death, Genevieve never once faltered in her commitment to the arts. She passed away peacefully on November 5th, 2015.

​Because of Genevieve, the AHOA/NEVAM  has been gifted with a phenomenal collection of artworks, journals, personal photographs, and ephemera. Genevieve’s materials are stored here, and a biography in verse has been written on her. More important, however, is the gift that Genevieve gave to the public. Tender, often wrought portraits, landscapes, and representational works give us a peek inside the life and mind of a unique and brilliant woman. These works show as well the psychiatric culture of decades past, serving as a reminder of how far we’ve come as a society, and what work still must be done. Genevieve’s painting skill, developed in over 50 years of practice, is complex, colorful, rich, and contains a voice all her own. We are honored to steward her works, and thrilled at the chance to share her incredible life and artistic legacy with the world.
Essence of All before us: the life of genevieve burnett 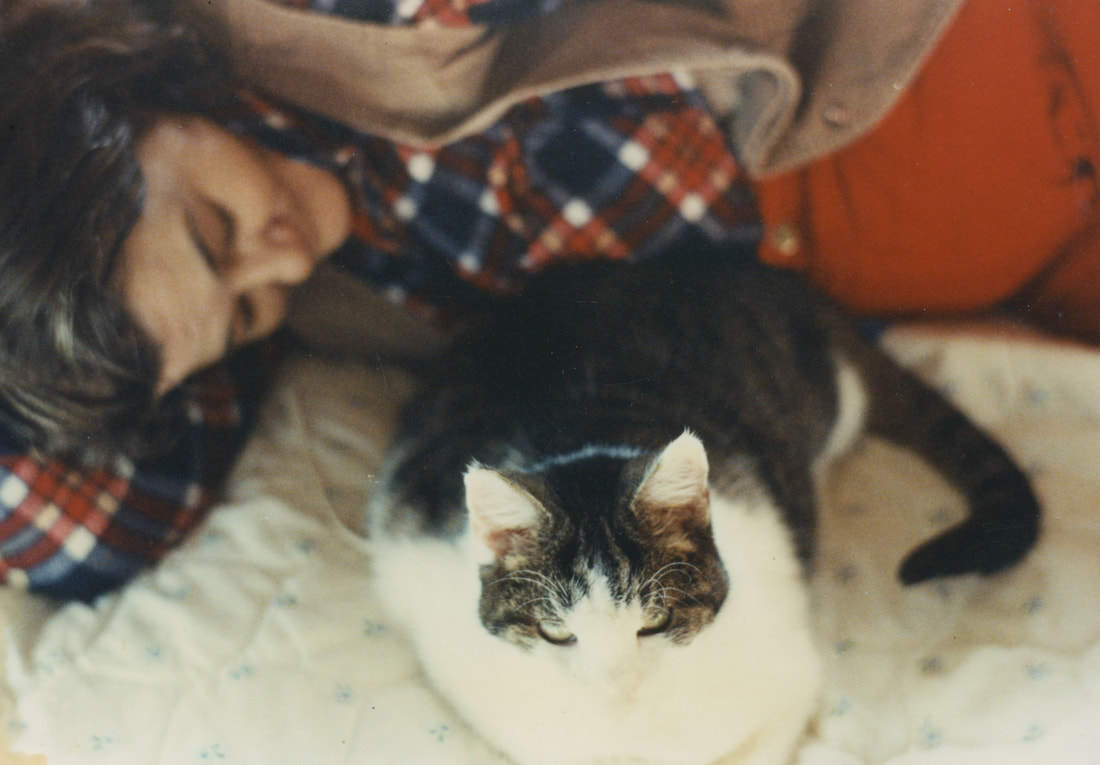